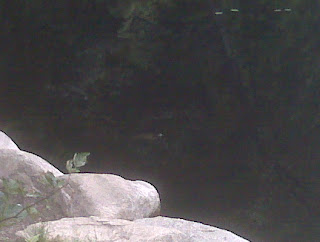 It's kind of a cool cloudy day here today so we didn't go to the river. Mum and I decided to go to Mundy park for a walk in the woods, instead. But,when we got to Mundy we saw a sign that said there was a new fenced dog park a little ways down the path.
It was awesome! It has two fenced areas so big dogs and little dog can play separately (if they want too) and it looks like they are going to add a water fountain. There were lots of other dogs there and I had a lot of fun. Everyone was so impressed with how fast I was, and they thought I had a cute face. There was a big fight with almost all of the other dogs but Mum and I were on our way out already so we didn't get involved in that. It was all started by one dog who's Dad said "she's an Alpha female". Mum says she was just a bitch with no manners! Some of the people left after that.
Mum and I went for a short walk after that and we stopped at the lake to watch the turtles. They were really close and Mum counted six of them. They looked like the were pretty big too! They were hard to photograph but you can sort of see one of them if you look closely in the picture I attached.
It's still only early in the day, so I don't know what else we will get up to, but hopefully we'll have another exciting outing after supper. I'll keep you posted!
Posted by Finn at 1:10 PM