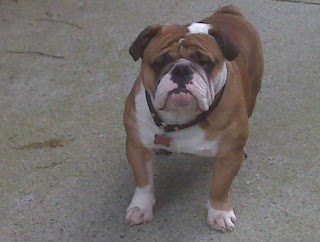 Hi Guys, I had a great treat today... a man day with Papa! We did lots of manly stuff .... you know... farting, scratching, a trip to the park to play ball, and of course a nap. It was awesome. 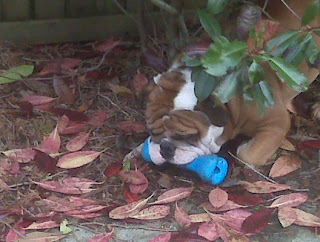 We saw a silly woman throwing a ball for her dog....but she forgot to take him off the leash! She would throw the ball and then run behind her dog on the leash, telling him to go get it. Papa said she was a "Menz", that's short for menza scema, which is Italian for ..... umm, well .... not very smart ;) 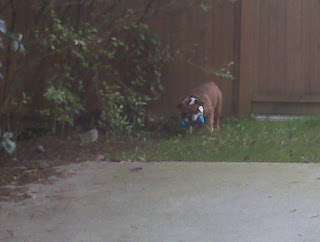 When Mum came home, we played fetch in the driveway.... also awesome. Then she hid my toy and we went for a walk. When we got home Mum let me of my leash so I could search for it. I found it really quick. I'm smart like that. 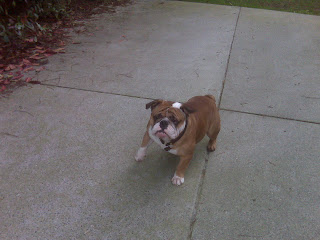 Hey every buddies... do you smell that?? Smells like spring!

We have had a terrific weekend! It's been sunny and comfortably warm!


Friday night we went for a walk at town center park. Love was in the air! Yuck! All the ducks are back from where ever ducks go and they are all pairing off ... sadly this means ducklings will be arriving soon and it is very difficult to compete with their cuteness.... but I manage! 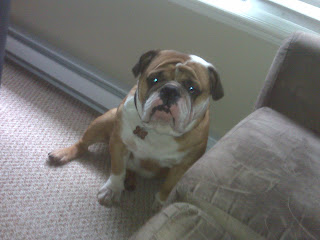 We also saw a beaver, he was doing a little spring up-keep on his dam. Mum of course, didn't have a camera! We also met a little baby bulldog. He was 4 months old and very cute. His Mom said she hopes he looks like me when he's big. (blush) She took a picture of us together.

Saturday Mum and I went to the dog park and I got to be a therapy dog. There was only one other dog at the park and we almost didn't go in because he was so barky. His Mom said he was better once the leashes come off she would really like it if we would come play because she needs to work on his socialization. (No kidding). Anyway, Buddy is a border collie Corgie mix, he is 11 years old and spent the first 9 years of his life as a farm dog. His owners gave him to a family to live with when he started chasing their neighbors cows. He is the family's only dog and so he has spent most of his life without any friends. At first Buddy wanted nothing to do with me and barked ferociously when I came near him, but he enjoyed chasing my ball with me and he was very polite always let me pick it up and return it to Mum (Even though he always got to it first).  After about 20 minutes of chasing the ball together something changed in him. All of a sudden he trusted me enough to sniff me and let me sniff him. After we sniffed each other we played and chased each other and wrestled a little bit. It was so fun, and  Buddy's Mom said she had never seen him play like that before. She thanked us for coming to play with him and said how amazing it was to see him so happy and playful. Mum and I were pretty happy that we could help him. 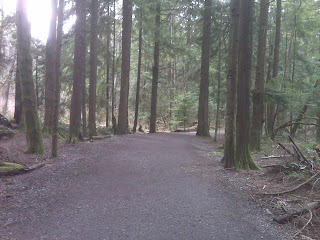 Today we went for a walk in the woods at Mundy park. We didn't see any bears today, but we did see birds and turtles ... and a lot of different dogs.  I saw a dust bunny in a t-shirt but when I went to sniff it discovered it was the tiniest little dog I ever did see! I'm pretty sure I was bigger at birth than this little girl. Mum says she was something called a tea-cup Yorky. She was very brave for such a little thing, she didn't bark like most small dogs and came right up to me, nose to nose! We also saw a Weimaraner, a Burmese mountain dog, a lab, two golden retrievers, two Sheppard mixes, a shih tzu mix, and a miniature poodle... and 4 people looked at Mum and said..."Great Dog!" They obviously have good taste.

After all this excitement I definitely need a nap. I still am not napping in my new crate, but I am happy to report that Mum has removed the door and put in a non-slip mat. It has made a big difference. I have been in a few times now to check it out... and retrieve the hidden treats. 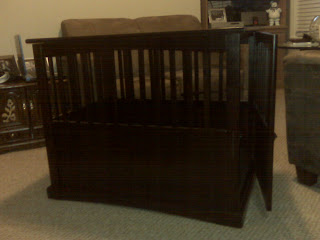 As I mentioned a while back, my parental human units bought us a new house and we will be moving in June. Mum decided then, that my old plastic crate would not be going in the new living room, but Papa said I had to have a crate so I would have a little place of my own. (Thanks Papa) So Mum began the search for a wooden endtable crate that wasn't super duper expensive... she had to do A LOT of searching.

She found this little number on petco.com , and it arrived today! They put it together for me after dinner so I could get a feel for it.

I'm not sure how I feel about it, but I think it will grow on me. I pretended to be afraid of it so Mum would throw treats inside .... I surprised her with my ingenuity when I pulled out the blanket and ate the treats off it. BOL, that'll teach her to underestimate me. 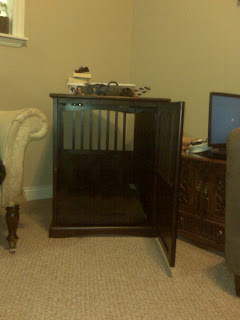 Mum is really happy with it and thinks it looks a billion times better than the plastic travel crate .... I say it smells funny.
Posted by Finn at 9:58 PM 8 comments:

Happy Saturday guys,
So Mum and I went to a new store today...its not really new...just new to us. I needed a refill on my treats, so I told her we should try The Urban Barkery! 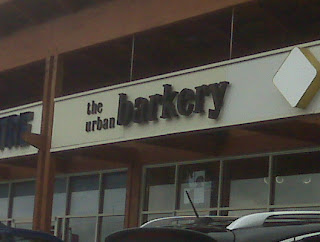 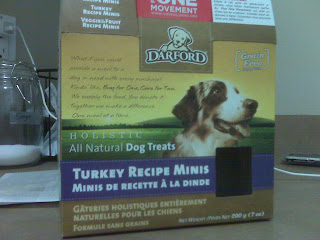 They didn't have my usual brand (Fromm Family) so we had to try a new kind. They are called Darford, and they are made here in BC! 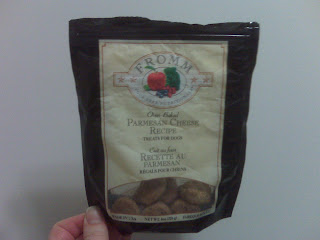 We also got a scoop of the in-store treats. Dudes!.. We got the salmon flavor and OMD you should smell them!  And they taste pawmazing!! This might sound strange but my Mum always tastes one of my treats when we get a new brand. She says she can confirm, you can actually taste the smoke salmon! 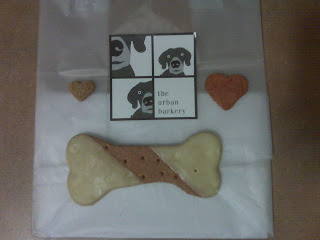 And we bought a "Super Lucky Puppy Treat". Mum says I can have it tomorrow since I already have a belly full of the other treats.... I bet I can con her into giving it to me tonight though ;) 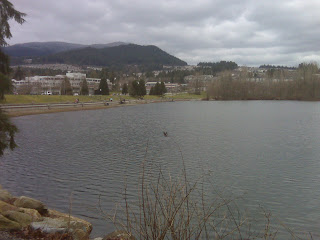 After the treats store, we went for a walk at town center park. It was our first walk there since before Christmas.  The ducks are starting to come back, and there were people fishing. Spring is here peeps!

It was a great Saturday morning, and now I will able to nap comfortably while Mum goes hunting for people food.
Home you guys are having a good weekend... enjoy the blog hopping.... 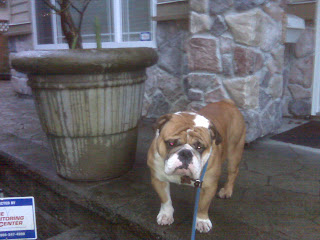 Let there be light!

Mum and I went for a 45 minutes walk .... that is a really long walk when your legs are as short as mine! It felt so good to get out and get some fresh air and stretch my legs, and it was warm enough Mum didn't need a jacket!

When we got home Mum gave me a good brushing. I am really shedding right now. Itchy itch, scratchy scratchy, oooh don't forget to brush my backy! Oh yeah, I am gonna sleep like a puppy tonight.

It's been raining for a week! 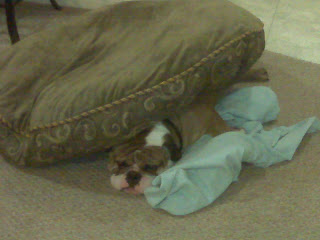 I have two new people friends!
My aunt Alana and uncle Sean came to visit us from Toronto! They are two of my Mum's nearest and dearest and they are super fun. 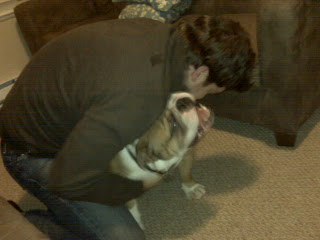 Uncle Sean played fetch with me and wrestled and when it was all done we had a little rest together. 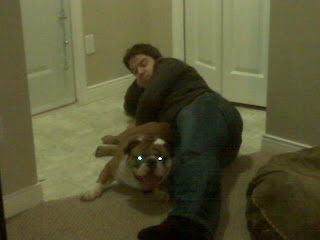 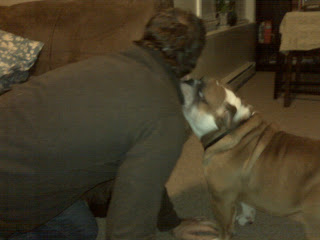 Aunt Alana played dress-up with me. This is her dressing me up like Mother Teresa. 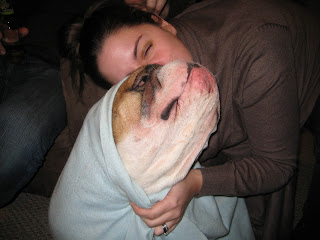 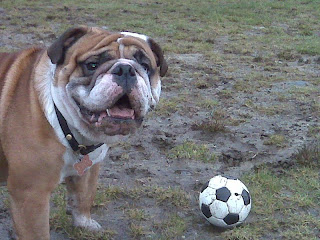