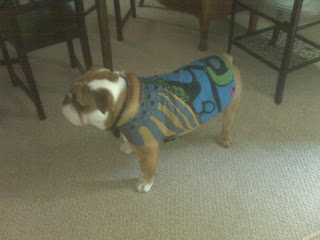 My Aunt Dinky told Mum I looked like a pansy in my rain coat. (Thank you Dinky) So my Mum decided to make me a new cooler coat! What do you think?
There is a denim one with a woolly lining cut out too, but not finished yet. Mum says I will need it when we go to Toronto at Christmas.
Posted by Finn at 9:29 AM No comments: 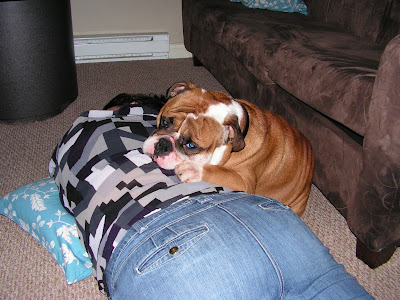 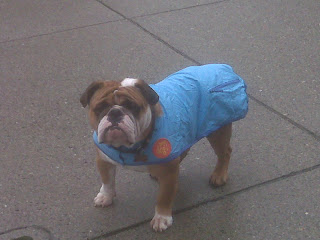 Sorry everybody. Papa has been keeping Mum so busy with some wedding thing that she hasn't been able to set up the computer for me. I said "Mummy, I need to write on my blog!" But she said I would have to wait. :(
It was a rainy weekend here. Saturday mum and I played fetch in the yard. I wore my raincoat! Later it cleared up and we went for a walk.
Sunday I woke up nice and early! I could just tell Mum wanted to take me to the dog park .... And I was right. We went even though it was raining and I had the whole place to myself! I played for a whole hour chasing my ball. I was really tired when I got home. Mum and Papa went to church and for groceries and I got to stay free in the living room! I slept the whole time.
Yesterday was really pouring so I decided I better stay inside. Papa tried to get me to go out but I said no way! I waited for Mum cause by the time she got home the rain had stopped.
Ok talk to you soon .... I think Papa has slept enough now!
Posted by Finn at 8:01 AM No comments:

I went to a bar-b-q! Yup I did! I had so much fun. It was another one of Papa's work friend barbeque's, and they said I could come too! The people had a big yard, and it was all fenced and they had lots and lots of grass for me to play in.....and they had a pond! 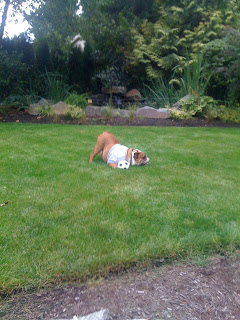 I wore my Georgia Bulldogs t-shirt, and I looked really cool....until I decided to go for a swim in the pond.

There were two other dogs there too, but I didn't get to play with them very much :( There Mommy's wouldn't let them! Kola's Mom and Dad found her at the SPCA, she likes people but doesn't trust other dogs. She didn't want to play with me at first and would jump away and hide behind her Dad when I came by, and later she tried to attack Chloe. Chloe came from the SPCA too. Her Mom wouldn't let her play with me because she was afraid I would squish her. Chloe is a wiener dog, one of the little ones. She was very cute, but she was also a little older, so she didn't really want to play to much anyway.

Later in the night Kola warmed up to me a little bit and we got to play on our leashes on the patio. Her Mom and Dad wouldn't take her on the grass because they thought she would get too excited. They were so impressed though...they called me a therapy dog ..... cause Kola has never played with another dog before .....never....she only attacks. I was a really good boy and showed all my manners. I stood sideways and let her smell me over and over again ...Cesar would be so proud ....but Kola didn't want me to sniff her. She played funny with her front paws like a boxer ... or a cat, I think when she learns to trust other dogs she will be really fun to play with. 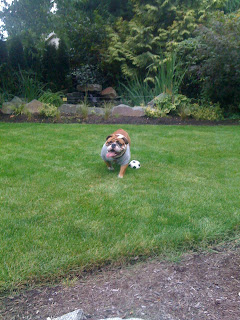 Well thats all for now. Mum needs breakfast ... and I need to watch her eat it...she might drop some.
Snuggles. 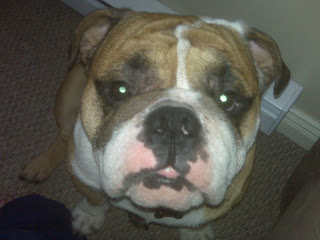 Hooray! My pawrents are home!
Papa picked me up on Sunday from camp. I fell asleep on the way home. Camp was really fun, I played outside a lot, I went on walks at the dikes, and the girls there loved me.
Mum came home last night. She was really happy to see me, and I was happy to see her too. She is home from work today, so we have had lots a snuggles, and a walk and later we are going to the park.
Gotta go, the cable guy is here. He's changing our cable service and I have to make sure he doesn't take away the Nat. Geo. Channel. That's Mum's and my favorite... We like to watch Caesar together.
Later Gators.
Posted by Finn at 10:20 AM No comments: