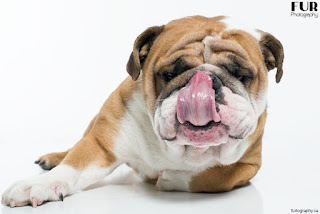 Well she has lost the plot again! Yup, Mum decided to go camping.

Now, you all know I love to go to camp. The freshly mowed grass, the attentive staff, the spa treatments, my own cozy little room with orthopedic bed, ahhhh, what's not to love. That's camping! What Mum calls camping is some form of torture, living like the cavemen did, but without heat. It's disgusting.

You seen Mum and Miss Gen and Miss Shannon have been talking for a while about going camping and taking the brat. They decided it would be best to do a trial run close to home. (Notice Papa was not part of the conversation)

Sunday, Mum loaded the car and we headed to Bailey's house. Bailey rode in our car because his mamas had too much gear. (That should've been clue! If your dog don't fit, stay home!) By the time we got to the camp site it was raining. It stopped briefly, but not long enough. I told Mum I would wait in the car.

Eventually, after a good nap, it stopped raining again and Bailey wanted to play. I said fine, I'd throw the kid a bone, and we played until the next rain shower, when I returned to the car. (At this point Mum was outright ignoring my requests to go home. The shame!)

Next we all went for a walk in the woods, that was cool, I was okay with that, but what followed was an atrocity. After a tiring walk, she made me lay down on the ground! Like an animal. The abuse of the day was becoming almost more than I could bear.

Finally it was dinner, and would you believe she forgot my dinner! Thank goodness Miss Gen brought enough to share. Soon after, Papa showed up. My rescuer. I knew he wouldn't take part in this nonsense. The only person who likes getting their paws wet even less than me, is my Papa. He was only there for his dinner. He didn't even have to ask, when I saw him say good bye to the brat I knew what to do. I said "Later bitches! Finn Dog out!" and I waited for him at the car.

We left them all standing huddled under a rain shelter to fend for themselves. Papa wished them well in protecting themselves against the bears and then we were gone.

I was so relieved to be home I nearly collapsed into my bed. Exhausted.... but also guilty... No really I was... a little... Bailey was left behind. Mum says he had a great time, but I don't believe her.

Well she did it again! My mum is convinced that May 24 is my blogiversary, and it is not! We missed it again for the third year in a row! Seriously woman, pull it together!

We've been having some fun lately, including finding a new swimming hole! We found it by accident while we were out for a drive and we can't believe it's only 5 minutes from our house!

Bailey and I have also been having a ball playing in his yard. His gotcha day was May 5th so we went over to celebrate and we brought my left over birthday cake to share. It's hard to believe that one year ago he was so little I could step over him!

When his Moms adopted him, the SPCA told them he was probably a lab / Shepard mix. But his vet says he is probably part Great Dane. Lol. I don't think he is done growing yet!

So the brat has moved on to finger foods! This is good news for me. I help Mum with the clean up all the time. I've had more peas this week than I know what to do with. Mum thought it would be fun to take a picture of us together the other day on our walk. We went down to the field and Mum snapped this pic of the two of us.

Aren't I cute? The kid was trying to tell me how to pose! Pishaw! I was doin this before you were a twinkle, son!

Well time for bed Blogville! See you 'round the neighborhood.

I've been a busy boy the last little while. You see back in March I went to camp for a week. Which was awesome! They had this cool egg toy that I loved, and they hooked me up with some spa treatments! Mum and the kid were gone for another week so there was a whole week of Papa and I hangin out doing guy stuff.... Napping and scratching mostly.

Two weeks later, after the fam was all back, G-Ma came to visit. She was here for a whole month. I love when she comes cause we spend lots of time together out on the patio. She even spreads my blanket on the love seat for me. We also did a little bit of exploring. This lake is only 5 km from our house and I've never been here before ... Nice going Mum!

Mums not a complete let down though .... She made this awesome cake for me today. Peanut butter carrot with apple sauce. Delicious! There are a couple pieces left so I might have to invite my buddy Bailey over to help finish it off. ( I forgot to tell you guys that Bailey moved closer to my house and we have play dates a lot more often now. )

Ian, the pawtographer, emailed my Mum last week. He is an artist and photographer in Vancouver, BC and he is venturing into Pet Photography. He is just starting out with four legged models, but we know he will be really successful 'cause my photos are awesome!

We drove into the city and went to his studio in Gas Town. He was really nice, and he had great treats .... Which is always a good way to make friends!

Our shoot only lasted about half an hour and that was more than enough time for him to capture my handsomeness.

If your people want to have your photograph taken, tell them you want to see Ian!

You can check him out here:
http://ian-coe.com/

And coming soon at :
http://furtography.ca/