Well At Least Someone Takes Photos

Hi All, I have been waiting to write this post in hopes of a photo to add with it. I think I'll have to add an old photo just so you don't forget what I look like. My mum has been really bad for forgetting the camera or her phone at home lately, and although she did take a photo of me at the park on Wednesday, using Papa's phone, due to technical difficulties I don't have it. 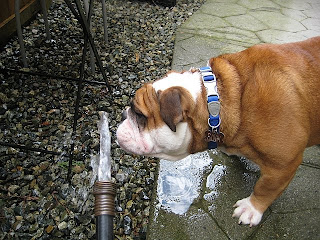 On the upside though, lot's of other people took pictures of me that day. I don't know what was happening... I haven't gotten that much attention since my first visit to the park. People were coming out of the wood work to pet me. 3 different people asked my mum and dad if they could take my picture. Old men were rubbing my head, babies were hugging me.... it was awesome!

One lady took pictures of a lot of dogs, she said she was sending them back to her country to show that dogs and people could be friends...I can't image a place where dogs and people aren't friends.... I love my people friends!....and I know you all love me. :)

One crazy lady fed her kid a piece of ham while she was hugging me. Good thing my Mum taught me that people eat first!! I know some dogs that would have stolen that ham right out of the kids mouth... that wouldn't be pretty! She realized she made a mistake though, and told my Mum she was sorry, she didn't mean to tease me. It was OK though, becasue I handled it so well I got to have a Fromm cookie when I got home. Mmmm..Parmesan.

Speaking of my people friends though, I met a few more people on another walk. One guy asked "Is he an english bulldog?"...but before I could answer the other guys  said "No, he's french, can't you tell by the accent." Haha, he was funny. I liked him so much he made me wiggle...and since I don't really have a tail to wag.... a wiggle means I really like you. The other person who makes me wiggle is my friend Mike. Mike and his husband live upstairs, and they give me lots of attention. Sometimes Mike looks like he's not friendly and then he sees me and he light's up! I have that affect on people.

Last night Mum and I just went for a short walk, and we saw bazillions of black slugs...gross. I learned that lesson a long time ago... they are chewy and DO NOT taste good. They grow really big here...like 12 cm (That's about 4.5 inches my American homies). Yuck!