Hi furends!
It has been a cold week here in British Columbia....we even had snow! Mum thinks the flowers that were starting to bloom last week are probably dead.

We went to the dog park today and I got to play in the snow fluffies. I met a boxer named Ava, and we played together for a while. It was super fun! She was only 5 and a half months old, but already tall enough to jump right over top of me! 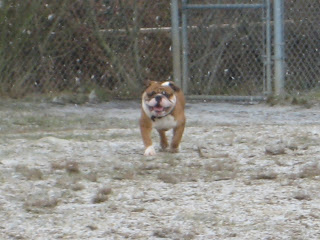 I also received more awards this week! My friends Oscar over at Oscar the Pooch and Roo from Roo's Doins gave me the Stylish Blogger Award. Thank you Oscar and Roo!!! Roo has also given me the very prestigious Doggie Bloggie Award. Thanks Pal! 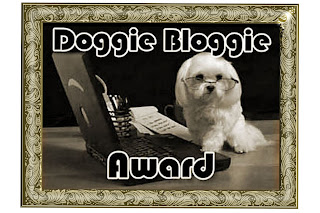 I am supposed to tell you 7 things about myself and then pass the awards on to some other bloggers....thats a problem 'cause I only follow about 15 blogs, and I just gave an award to 5 of them .... so here's the plan .... since rules were made to be broken (trust me, I know all about breaking rules!) I will accept these awards .... and pass them along later.

But I will tell you about myself...

1. I drive my Mum crazy wanting to go in and out of the house...especially when there is snow or rain for me to lick from the patio!

2. Cucumber is my favorite treat Mmmm,  the only veggie I don't like is celery.

4. I was born in California, and came to Canada when I was 16 weeks old.

5. I love to swim, but bulldogs don't swim well, so I wear a life jacket.

6. When Mum can't find doggy t-shirts for me she buys kids size 5.

7. Mum has been trying for almost 3 weeks to train me to use the potty bell. I know what she wants, but choose not to ring it.

Well, its getting late. I better hit the hay. Later friends!