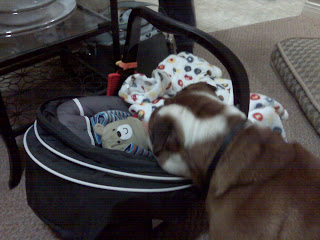 I met a baby last night!!! He was the tiniest little person I ever did see! I didn't know people came in that size. I've seen little kids at the park, and I play with Lucas next door, but this little guy was too small to play! He was only the size of Papa's shoes!
My mum's friend came for dinner last night and brought her brand new baby Wesley. He is 5 weeks old, but he was born 3 weeks early, and he's only 9 little pounds .... Mum says I weigh 60 big pounds.
I was so excited to meet him, he smells so good, and like sooo many things I never smelled before.
Mum made it very clear that I was not allowed to jump, only sniff. (But I did sneak a few licks - he was too cute not to)
I felt so many emotions, first I was excited to have visitors! I even let out a bark! Then I was a little scared because he made little noises I never heard before, and had so many smells, and then I felt jealous cause my Mum was cuddling him and not me. She let me smell his feet though and rubbed my chin and told me everything was alright and I felt better then, so I went and layed under my bed for a while. And then they went home and I was excited again because Mum was all mine again. And then I fell asleep and snored really loud, cause all that newness is very tiring.
The picture is me giving Wesley a goodbye sniff, you can see his little teddy bear hat.
Bye for now!
Posted by Finn at 7:39 AM