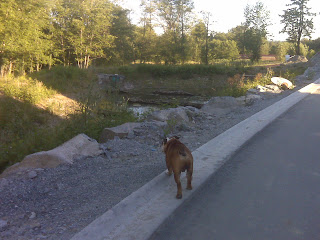 Holy Moley Putey Tats!
We saw a great big deer on our street! Mum says he was an 8 point buck, whatever that means!
I was joggin' along minded my biz when all of a sudden this thing bolted out of nowhere, leaped over a ditch (I mean cleared it!) And ran off into the bush!
It was pawesome. I got put on my leash for a few minutes after that 'cause Mum says we're not allowed to chase the deer, or scare them on purpose. (Boooo!) But after we were sure he was gone and was traveling alone I was off again!
This new neighborhood is super pawesome dog friendly. I don't know what I was scared about!... Except maybe the giant skeeters!
Posted by Finn at 9:56 PM