I had a play date!

The peeps and I were walking by Molly's house and she was on the patio. So my peeps talked to her peeps and Mum told them we were going for a walk and then going to play in the field. While we were in the field Molly showed up with her peeps to play with us. 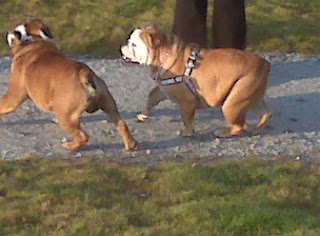 There really is nothing like playing with another bully. Most dogs I meet just like to bounce and run. Molly knew what's up! She put me in a head lock right off the bat.We sniffed, and ran, and wrestled, and tumbled, it was so so soooo fun! 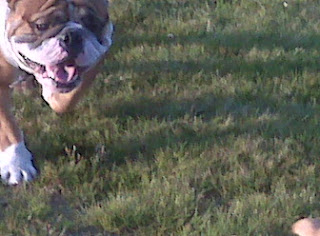 To people not accustomed to Bully's it probably looked like we were fighting at times, but it was actually the best play I have had in a long time! I had to be hosed down when we got home ... partly to help me cool down and partly 'cause I was covered in slobber. Molly and I both had wet slobbery faces by the time we were done. 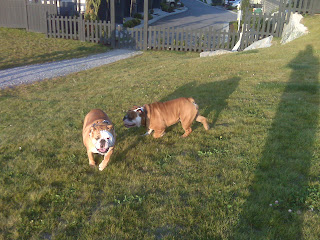 What a pawesome way to start the week!
Posted by Finn at 10:58 PM