Yo yo yo, what up my peeps? So it's been a whole week since my last post. I appologise profusely. The week started pretty slow, and then got better. 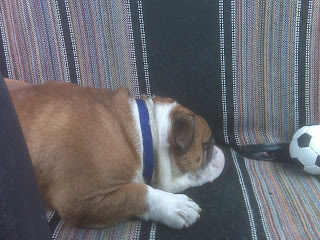 Early in the week, we went to the dog park and ended up going for a walk in a neighborhood we don't live in. Which is only slightly less boring than walking in your own neighborhood. See, we arrived at the dog park and there were two dogs already playing, which I was pretty excited about. But as we got closer, one of the dogs (a boxer)  started barking at me through the fence. He was pretty agro about it too, and his Mom seemed to think his aggression was funny. I was gonna show him that Tony Danza isn't the only boss around, but Mum said no.

The rest of the week we just did our regular walks around the neighborhood. One night we found a baby bird who fell out of a tree, we tried to help him by scooping up to put him in a safe place, but he was so scared he started to shake and scream so  we had to leave him. 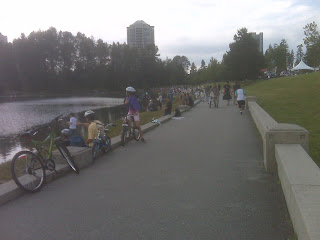 Yesterday, we finally went to the town center park. There was a fishing derby, so there were lots of kids, and of course.... I was the star of the day. I got lots of belly rubs. Mum had some errands to run afterwards, but when she came home I spent the rest of the afternoon on the patio in the sun. It was a great day! 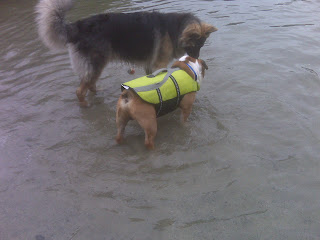 Today Mum and I went to Bunsen Lake to play in the water. I have to admit, I had much more fun than the last time she tried to trick me into swimming! There were lots of other dogs there to play with, some of them stole my ball from me, but I always got it back. There were some babies there today too.There was a baby Great Dane, he was super fun. He was only  about 8 months old.....but already way taller than me. We ran circles around a picnic table until we started to wobble. Haha, that was fun! And there was a baby rottweiler, who was the tiniest little dog I ever did see. I sniffed him and said hello, but we didnt play cause he was too small!
I also got my picture taken by some people who thought I was so cute in my life jacket.... and well she was right. And another lady told my Mum she should put me in commercials, cause this face could sell anything! 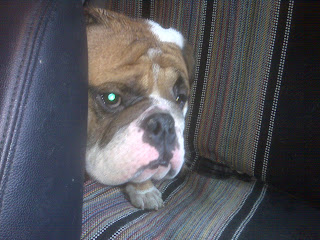 I spent most of the afternoon napping, swimming  really tires a boy out. And now I have to go bug Mum while she folds laundry....its pay back for the time she spent reading this weekend! Later! 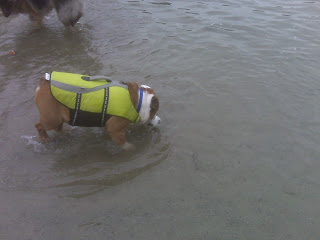