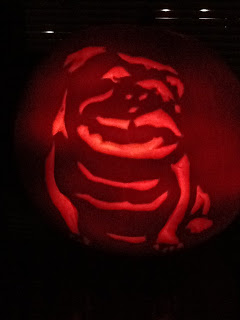 Boo!
It's Halloween furiends! I am so excited to see all the little trick or treaters. I wanted to go trick or treating but Mum says that's only for dogs with little people, and we don't have any of those. I think that's a stupid rule.... I like treats too ya know!

Mum was gonna dress me like a mini-lion, but she procrastinated to long on making a mane. FAIL! Then she thought about dressing my like a pumpkin, she finally decided to dress a pumpkin like me .... Isn't it cool! 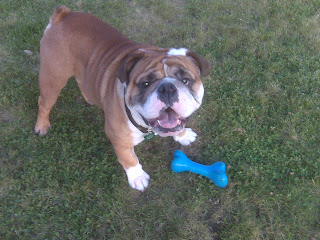 Come on Mum! Chuck it! 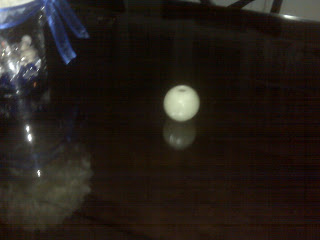 Dudes! You will not believe the coolness that is my new ball!!! Holy dog piles its the coolest thing ever!

I took my peeps to the park last night and got to play with my new ball for the first time. It fits perfect with my chuck it, and it is so bright that you can see it fly across the field like a little green spaceship!

I was a little freaked out by it at first, but once I pawed at it and saw it felt like a normal rubber ball I was all over it like white on rice.

I was so excited we had to go back to the park at the end of my walk! I can't wait to play with it again tonight!

If your pawrents have those job things, and are lazy asses who don't take you out until after dark, tell them they NEED to buy you this!

Are you ready for some football? (I mean that literally) 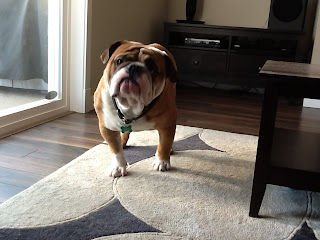 Hey Pals, I met a new friend this week. His name is Cody. He's a giant German Shepard, I walked right underneath him! We met at the park and we played while our Dad's talked shop....they're both PoPo. He has a new little sister too, hopefully I will meet her soon. She's not ready to be off leash yet. My daily trips to the park have become nightly trips. The days are really short now so it's dark when we get there. Mum is gonna buy me a glow in the dark ball! That should make things a little easier.... Although I have become really good at using my nose to find my toys in the dark. So it rained all night and finally stopped this morning. I'm hoping it holds off! Papa is coaching football tonight and if there's no rain Mum and I are going to go watch! If it rains I have to stay home. Boo! Who will be the mascot if I'm not there? Well gotta run ani-pals, have a great Saturday!
Posted by Finn at 10:16 AM 5 comments:

So friends it's been a quiet week, mum and dad are back to their work routine, I am back to my daily walk and trip to the park routine! So there isn't much to report

My friend Payton and her mom had a nasty and unnecessary encounter with a disgruntled neighbor this week. She was playing in the field , where I play everyday, when a couple with 3 dogs walked by and Payton trotted over towards them. She kept a safe distance but the man started yelling at her mom about why she wasn't on a leash. Payton's mom explained that a) they were playing, b) Payton sometimes gets anxious on her leash but is a sweet girl without it, and c) none of the other neighbors have ever had an issue with it. He replied with "well it only takes one!", among other overly confrontational things. What a jerk! Further along their walk they ran into the couple again, and the man blamed the incident for causing his pregnant wife to go into contractions. BOL! His wife might have been about to have a baby, but he was having kittens over a 15 pound dog!

In other news, Mum bought a new gadget, something called an ipeed ipad. She has been taking pictures of me non stop! She even takes pictures of me sleeping......creepy! She is still trying to figure out had to add them to my posts though. :s

She also downloaded some app that was supposed to translate my grunts into human words. She deleted it though. She said who ever created it was obviously not a fluent speaker in dog. Had she of listened to it, I would have left a treat for her on the floor while she went to get one for me!

Well that's the kind of week it's been! Keep your paws on the floor! 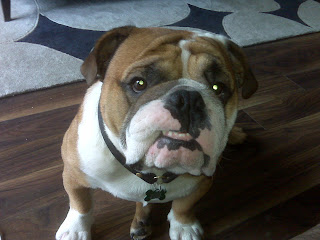 The fall weather has definitely set in. Its been a cool, crisp week .... perfect for playing outside! We have had a busy week.

Mum and I missed about 3 weeks of Coronation St while we were away. We're thankful for PVR! We've been trying to catch up. Don't tell Mum ... I really couldn't care less about Sally and Kevin splitting up, or what happens to Tracy .... I'm in it for the hour or so of cuddling every night. 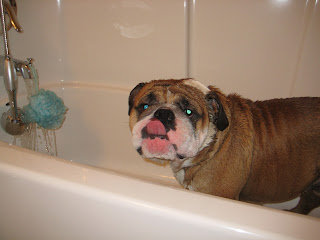 I am also thankful that I had a bath on Saturday .... now stick with me on this .... I'm thankful it was Saturday cause that means it wont happen tonight! BOL! 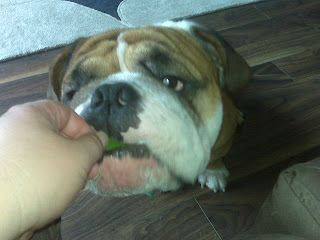 I am also thankful for my Mum who shares her snacks with me and slipped me some roasted bird tonight! And also that she makes me jackets to wear in the rain. And for our car port so I have a place to pee when I don't want to go out in the rain. 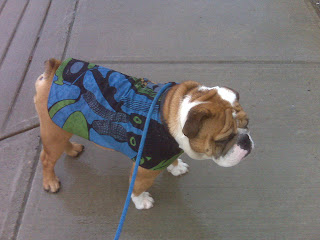 I'm thankful for my Papa who gives me belly rubs and chin scratches... oh yeah! And cause he maintains my daily intake of treats to the optimal level. 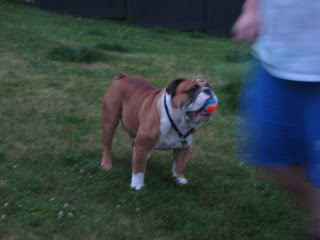 And finally I am thankful for long weekends cause its an extra day with my peeps. So... What are you thankful for?

We now return to our regularly scheduled program 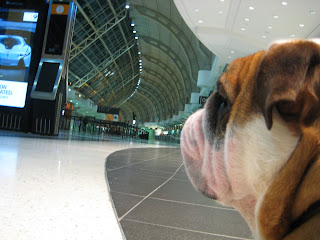 I have so much to tell you about!!! We got home yesterday morning from my very much needed vacation. Being the neighborhood stud gets tough and I really needed the break. 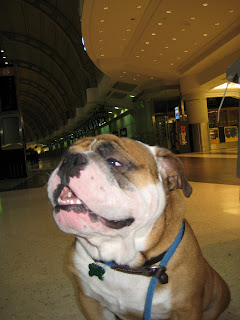 So two weeks ago yesterday, my Mum and Dad tied the knot! That's why Mum and I flew to Toronto, Papa was already there waiting for us. We stayed with my Nonna and Nonno. The first few days were really busy, there were lots of people coming by, I had a whole news house to explore, with a yard and a deck! Mum and Dad seemed to be doing a lot of coming and going. 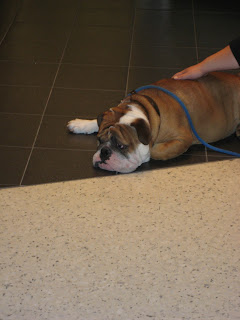 After the wedding things got quiet and then ... they left me! Yup they went off to some place called "France and England" and left me with my grand parents. I was a little put-out at first, but hearing about it later I think I had a better time. 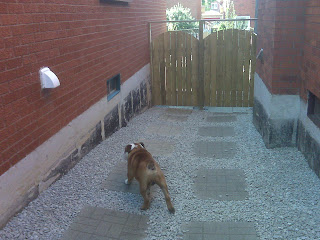 I mean, they talked a lot about planes and trains and walking and site seeing and more walking, it all sounds very tiring. I on the other hand, spent the next ten days sunning myself on Nonno's new patio. It was glorious! Aunt Bessie and I watched TV together every night, and Nonna was very generous with the treats ... even if she did insist on cleaning my wrinkles! 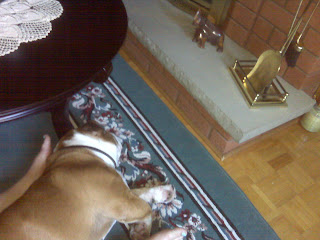 I took daily strolls around the neighbourhood and introduced my self to all the peeps, and I met a nine week old bulldog. I also got to play in the back yard, it was nice to have a yard big enough to run in. 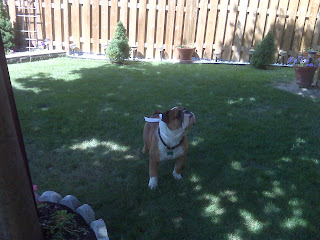 Oh and I made friends with the two budgie birds my Nonna adopted. 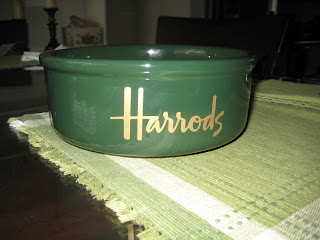 My pawrents finally came back and they brought me a present! They went to some place called "Harrods" (Mum was a lot more excited about it than Dad was) and they brought me back new dishes! I said "No toys?" But Mum says I have better toys already, and she wouldn't spend £100 for a leash, or £130 for the Sherlock Holmes tweed jacket ... cheapskate! 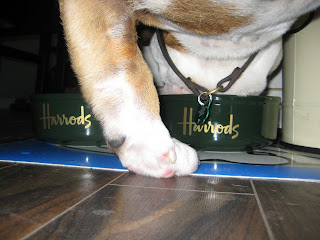 We had to go to the airport very very early yesterday, I was still very sleepy. When we arrived in Vancouver, Papa's friend picked us up. He brought his dog Berkley to meet me. She was a very nice girl, but I was too tired to entertain her, I fell asleep while she hung out with Mum in the back seat. I hope maybe we can have a play date someday. 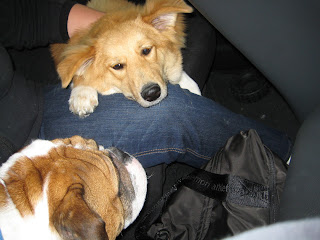 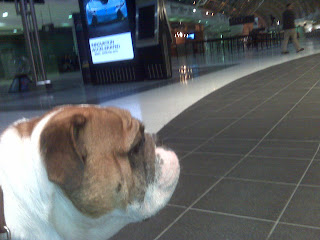 Arrived home this morning! Tomorrow after I've had a good sleep I'll tell you all about my vacation!